“An Urgent Call to Free Yoga” DIscussion and Response

My friend and colleague Lisa Kazmer forwarded me this article and asked me my thoughts on it.

Hmmm interesting. I hear her message and absolutely am in support of the return of the feminine. I also find my eyes rolling in classes that feel too commercial, when a teacher chants in a sing-songy way that has no authenticity to their own voice and own teaching, and at the same time some ‘marketed’ branches of yoga feel like they’ve evolved the practice rather than devloved or corrupted the practice. Lotus flow of Laughing Lotus gave me the freedom of expression to truly find the Goddess and art in the practice of yoga. I will of course speak to naked yoga for a moment that being my area of personal experience came from a transformative journey where I felt a true authentic connection with the mother goddess deep within myself. The impulse arrived how can I practice like this in a group. One wasn’t available so I created one. I wanted to share my experience and continue deepening it. People showed up. Some people showed up who would never practice yoga otherwise. I had a Brooklyn NY cab driver as a student this week who told me this was the only way he could find the inspiration to take care of himself was to explore the practice naked. Should this practice be removed because perhaps a ‘gimmick’ got him in the door. I am an advocate of having an entry point for everyone. Every effort to rise raises another. It’s like saying, if you can’t read the classics don’t read at all. Or if you’re not a serious yoga student you shouldn’t practice yoga. Some teachings need to be diluted and students need to be met where they are. Is a little yoga better than NO yoga? Because one cannot absorb all the teachings should the teachings be removed completely? That reeks of privilege and yogic snobbery to me and is dangerously close to being elitist. I hear the articles plea for authenticity and tradition, and also wonder of the separation this article creates. There is a rise in the “new-age-y” yogic community of spiritual elite-ism and I question the radical views in the article as a claim to authenticity that perhaps the shadow of the article is “I’m a better / more authentic yogi than you.” Double eye roll. Of course as I write this and look at the judging in the article that I’m judging. Triple eye roll. I have been reflecting recently that it’s easier to focus on the 10% that separates us rather than the 90% that brings us together. My counter to this is a plea for unity and mutual support and open discussion around these powerful issues to to remember we are wanting to ascend as a human species into one-ness and yoke ourselves together – the true meaning of yoga.

I met Kimber at a film shoot for a documentary that included naked yoga. I rolled out my mat beside him and could tell immediately this a man who had a relationship with with Earth. I was quiet for a few minutes simply lying next to him breathing, like lying next to fertile Earth. “Are you from Vermont?” I asked him. He looked taken aback. “Yes,” he answered.

“I can feel the land in your body,” I told Kimber. I had become increasingly familiar with Vermont land energy on visits to see my spiritual mentor Suzanne d’Corsey who lives in Vermont.

Below is Kimber’s Story ~

I was a young boy in the hills of Rochester, VT in the sixties. This was a time of great civil unrest, but also a time of soul searching in the form of free love and free spirit. Near our home was a hippie colony called The Fisk Farm. I believe it still exists today. Stories of carefree nudity as told by adults in hushed voices were very intriguing to a ten-year-old boy. I missed the whole Woodstock phenomenon by about two years. I was curious –  free love and social nudity. How could a young boy not be? 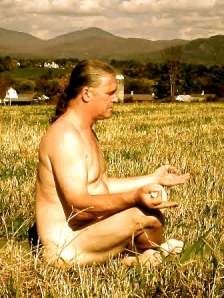 A bit about my background: My ancestry is deeply connected to the land I farmed and lived on. My family moved to Vermont in the late 1700s from New Hampshire.  We’re farmers.  I’m named after the Kimber that was my great great great Grandfather.  It never occurred to me to do anything other than be a farmer.  My ancestors are farmers.  It’s what we do, who we are.  I attended college at UVM as an Animal Science major.  It’s what my father and my father’s father and his father’s father did.  It’ hard manual labor being a farmer.

Just in these past few years, however, things have changed. The farm is no longer sustainable. We’ve decided to sell. The cows are gone. There is a “For Sale” sign on the land.  Farmer… it’s becoming an identity of the past. I can now say that’s not what defines me –being labeled “farmer.” Something new waits on the horizon.

My life was very predictable as a farmer. It was in my blood. The evolution out of the farmer role began sort of by accident, really. A few years ago my wife got into a car accident.  She hurt her neck and shoulders.  For a while she went to a chiropractor until our insurance ran out.  She said the massage part of the treatment was useful.  I thought how hard could it be, I work with my hands all day, so I started to give her massages on a regular basis.  Next Christmas, under the tree was a massage table.  A gift from my wife, of course she’s on the receiving end of it.  I really enjoyed practicing massage so I took a few classes at the community college.  That led me into studying Reiki and eventually attending massage school, from there yoga.  What I learned from massage school and Reiki, I was able to apply to the animals on the farm.  I did Reiki on the new calves.  My neighbors have had me work on their dog.  One of my neighbor’s children has a terminal illness so I volunteered to work on him as well.  This transformation of identity was gradual. Much of my identity was wrapped up in being a farmer. It’s all I’ve ever done and all my family has ever known. My wife’s accident, however gave me a new entry point into another career path and way of being. There’s a lot of weight we place in this world on labels and identity.  But I’m not afraid to let the label of ‘farmer’ go.  Maybe I’m a healer. When I give back, energy multiplies. It heals me by healing others. This journey started when I turned 50. Eight years later the doors are still appearing.  Each thing I do opens up another door. Of course it’s my decision to open it, but each time I do opportunities keep happening. I try to keep my hands in it, give something back, get involved.

A guiding practice through this transition has been naked yoga. It was one of those doors that opened and I walked through. Something of the mystery and intrigue of the naturist lifestyle that was whispered about when I was a boy found its way home to my own body. It’s a bit of the hippy in me coming out for expression that I just missed in the 60s. It also brings me back to the simplicity of being. I release the clothes. I release the identity. My first group class of course there was some nervousness as in anything new. But there also was an excitement, like Hurry up! I can’t wait to get my cloths off! There was no fear. I was like the heifer that couldn’t wait to get the halter off. FREEDOM. I believe nudity is a path to the soul. This soul journey led me to explore other clothing optional paths – Naked Church with Isis and Rev. Charmaine, Rock Lodge Naturist Resort, naked body painting in Times Square with Andy Golub.

I’m ready to embrace a new identity. Naked yoga and naturist events are helping me release the old one. I’m proud of my heritage. The generations of family have given me a foundation to support anything I attempt. And I look forward to the future. There is no fear in releasing my identity as farmer. Life is good. The skill set that farming and the experiences it lead me to, have much value. One week after the farm equipment auction, I was hired as a foreman on the construction job site at a medical center for the next two years. Most days that job will end at 3:30, giving me time to apply my massage skills. Time I didn’t have before. Next fall I plan to complete the Reiki Master course. I hope to some day take an Esalen massage course at Findhorn, Scotland. There is a lot to do. I’m looking forward to seeing what’s behind the next door.

5 Reasons to Get Naked Every Day