After sifting through the beautiful pictures and inspirational quotes I received from the Naked Yoga Challenge, I realized I had created an impossible task of choosing a ‘BEST’ photo. Really, what was I thinking… Every photo was the BEST! Each one wonderful in its own way. Each person who submitted a photo varied from an absolute first time naked yoga practitioner who was inspired by Challenge and explored the idea of trying naked yoga for the first time, to seasoned naked yoga teachers who had their own movements. There was, however, one individual who wrote to me regularly about how the Challenge was taking her deeper into her own practice. She submitted three photos each quite different and capturing a different essence of what she experienced in the naked yoga practice. She wrote up an article on her experience of the Challenge that was posted on Clothes Free Life. The Challenge turned out to mean more to her than taking a cute selfie of a creative pose. It took her deeper into her own conscious inquiry of the human body / spirit union. I called her last week and we spent an hour on the phone speaking about her naked yoga practice and her experience of conscious nudity. This is her story…

When did you first start practicing naked yoga? 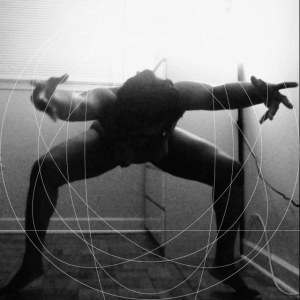 Yoga has been a part of my life for three and a half years. I first began practicing naked yoga late last summer. I was tagged on Instagram for a yoga challenge called Naked Soul Yoga conceived by @iamreneewatkins / @nakedsoulyoga. It sounded interesting and I had a yoga practice and I thought “Sure! Why not?!” In the challenge, participants took a picture of themselves nude in a yoga pose each day for one month. I started taking pictures of myself and began sharing in the challenge. It went from there.

It brought me into a whole other aspect of being in my own skin. I’m tactile and movement is an important part of how I experience the world. I enjoyed being in my skin, didn’t have to think about what outfit to wear. At the same time I was feeling so many different things during the challenge. Sometimes I felt self-conscious about my appearance as I looked at the other yogis who were submitting photos. I found myself thinking, my body doesn’t look like that person’s body and their expression of the yoga pose. As I was feeling those feelings, however, I also began to sit with them.

After completing my participation in that round of Naked Soul Yoga challenge, I continued to share naked yoga posts here and there along with others who had dialed into the community. In time, I saw a lot of comments on posts using descriptions like ‘sexy’ and so forth. And some posts took on that theme as well. Sometimes fuller discussions within that theme would unfold. This brought up a lot for me. I began to feel like discussions strayed away from the actual yoga and were taking on more of a sexual tone. For me, it felt like the attraction and sexual energy that was being created was overtaking everything else. There were very few people I connected with about the actual experience of the yoga. I felt pretty self-conscious about that.

I committed to finish that particular yoga challenge even though it brought up many different feelings and emotions. I chose to stay present and complete my own inquiry rather than put my clothes back on and stop participating.  The leaders of Naked Soul Yoga, themselves, did a great job of presenting the yoga and keeping that focus consistently in how they offered it. And some shares from participants moved and inspired me as well. I also enjoyed participating in and co-leading Natural Foundations Yoga challenges in the fall, which was created by a clothes free lifer @homeclothesfreeyogi. He is also dedicated to the exploration of the yoga in practice, philosophy, action off the mat and reflection. It was offered to participants as clothing optional, and the focus never strayed; other co-leaders of that challenge maintained the focus on the yoga beautifully as well. There were a number of participants that gained a lot of personal depth from it, based on their shares. So, those particular clothing free yoga experiences were very, very positive and deepening for me.

But, after completing a final round of Naked Soul Yoga in December, I eventually decided to dial down my Instagramming. I realized I was spending hours looking at other posts and associated discussions rather than being present with other things in my life. I spent a lot of time comparing myself to others or thinking about what was wrong with me.

When I saw the Naked Yoga Challenge posted on Naked Yoga Alliance, I was hesitant to jump into another one because of everything that had come up for me in the recent past. But I also realized that this one was different. I didn’t know who else was participating. There wasn’t a sexual vibe to it. It seemed to be about yoga. There was a quote each day I could think about and I could simply try on each pose you offered to see how it felt in my own skin. All I had was to explore the moment, my body and my yoga. Sometimes I cried, other times it was peaceful and some days it was jolly and joyful.

Has your naked yoga practice opened up other opportunities for you to explore conscious nudity?

After my first naked yoga challenge, my naked explorations slowly began to take me off the mat. They started small with something like, walking to the kitchen to get a drink of water after my yoga practice. Next I found myself sleeping naked and getting out of bed and making my morning tea without clothes as well. I kept exploring.

“What would it be like to sit at my computer and answer emails without clothes on?” I wondered. Eventually I began to eat some of my meals naked. Finally I thought after practicing naked yoga one day, what if I just rolled up my mat and stayed in my skin… period. It was a fun rediscovering – I have a body. My armpits were feeling the air. My belly button came back – I have one – wow! I have awareness of toes and toenails now, not just a block of foot under my ankles. I have breasts and nipples and when I sit down they hit the table. It was a slow process of moving from self-consciousness to consciousness. Little parts of my body would come alive. Little moments of awareness would creep in.

It sounds like you didn’t grow up in a nude friendly environment and that being naked is a new practice for you.

Yes, that’s true, I didn’t grow up like this but I did share with my mom about the naked yoga challenge. We’re very close and can have a woman to woman conversation. She heard how excited I was about exploring this and the excitement is what landed on her. She noticed I started writing again and my whole personality was opening up more. It felt special to have her support and to have someone I could be open and honest with about this. This part of myself that was opening up started showing up in my other relationships. Parts of myself I had hidden away began coming out. I was talking to a friend and found myself telling her about parts of my past that I had never told anyone. The conversations I was having started including my whole self. It was incredible to be honest with myself, to own past experiences that I had locked away and to speak about them openly.

Tell me about your experience of your yoga practice right now.

One of my friends recently gave me a naked yoga DVD called Yoga Undressed. With this DVD, I began to explore a flow style of yoga. It has completely transformed my yoga practice. I felt so powerful. It was a whole new yoga. As my clothes free practice continued to open and evolve, I’ve been referred to as  ‘Goddess’ and ‘Queen’ and would receive tag words on my photos like ‘beauty’ and ‘power.’ This was not language I used or I had in my life much. It was new language and it was new to see myself that way.

Have you taken any group naked yoga classes yet?

I haven’t gone to a social event yet. I’m scared, but I want to.

What advice would you give to someone considering the possibility of practicing naked yoga for the first time?

At first it might seem weird. Try it anyway without feeling the need to ignore your current thoughts. Get in a pose and just let it land. Accept it. Be with whatever comes up.