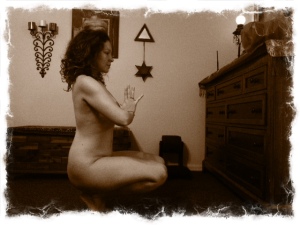 Surya from D.C. writes to me this week a common question that I have received from yoga teachers who desire to begin a naked yoga class in their community.

“Hola Isis! I am setting up Naked Yoga classes in D.C. beginning next month and a big question asked is …. is it legal?  I don’t believe it is but i wondered if you have an answer you give when this question is asked?  Much love and appreciation for sharing!

I’ve taught primarily in New York so my knowledge is of New York laws around consensual social nudity. Here’s what I’ve learned.

1.    Legal in a Private Location. Basically, naturism in a privately owned or rented space in New York is legal. I taught hundreds of classes in my apartment building in New York and at a few local yoga and dance studios who had supportive building owners and managers. My experience teaching naked yoga has been mostly isolated to New York.

2    Nudity for art’s sake is legal. New York has laws that protect public nudity when it is for the sake of art which is why Andy Golub gets to paint naked bodies in Times Square. Early in my teaching, I rehearsed and filmed for a naked yoga documentary on the top of an art gallery of a three story building.  That three story art gallery was right above a high-rise hotel and a rooftop restaurant. We were seen by many who were not part of our class but those who saw were amused or seemed to shrug it off as a “New York Moment” as we never received any complaints that I know of.

Social nudity is a regular occurrence so tap into your local communities to fill your classes and receive support as well. There are regular nude events in New York that include naked painting events, naked comedy and even naked dinners at New York restaurants and other nude social activities. These are done in private settings or settings where art is a focus. Some public events skirt the issues of legality if they move fast enough to avoid getting arrested such as the naked bike rides that seem to be popping up in different big cities like New York, Boston, Montreal.

Several other states such as Vermont and Oregon that have laws in place that protect people’s rights to be naked socially.

You need to check with the state laws in your area if you are teaching in Maryland. Naturist Action Committee http://naturistaction.org/ breaks down the nudity laws from state to state. I find an interpreter for the legal jargon is good to have on hand. Here’s what a few naturists who are lawyers have shared with me about your situation in Maryland.

My lawyer friend, naked yogi and legal interpreter Eric shares “Yes, from my reading of the statutes, Naked Yoga is legal in D.C.  Basically, the act prohibits exposure or actions which are “obscene, indecent or filthy.”  According to Supreme Court rulings, prevailing community standards would apply in interpreting these vague (perhaps meaningless) words.  Unless sexual activity is involved (which of course it would not be in the type of naked yoga classes with which I am familiar), the practice of naked yoga would not be deemed to be obscene, indecent or “filthy” (god, what a bizarre choice of words, no?).   Particularly if it is done in a private setting where only those who choose to do so can witness it.  If done publicly, there might indeed be a high risk of prosecution.  You should be aware of this case in neighboring Virginia, where a person was prosecuted for being naked in his own home, with his blinds open, and was observed by a passer-by:

Even in that case, though, there is a likelihood that some sexual act would be required for conviction. I believe the judge dismissed this case and the defendant was not convicted.

So, to be on the safe side, the naked yoga class should not be visible to passers-by or members of the public.

In addition, also to be on the safe side, participation should be limited to those 17 years of age and older.

I hope this helps!”

FEDERAL LAWS: If you are teaching in Maryland State you come under state laws but if you are teaching in D.C. that is different and refers to Federal Laws and also Municipal Laws. There is no anti-nudity law in place on the Federal level. Many aren’t even aware of this including certain citation officers that could write you a ticket if you were naked in a state park or by a state monument in D.C. The Municipal laws of D. C. however, state (a) It shall not be lawful for any person or persons to make any obscene or indecent exposure of his or her person, or to make any lewd, obscene, or indecent sexual proposal in the District of Columbia under penalty of not more than $300 fine, or imprisonment of not more than 90 days, or both, for each and every such offense.

What makes something obscene is often how it is perceived. So you would most likely want to choose a private naturist friendly location to hold your classes and right now there are no laws in place that would/could keep you from doing that.

If I could give you two tips they would be below:

Create Alliances: Best to be transparent that your classes include nudity with whoever you rent space from to avoid problems in the future. I find it useful to align with a body positive community perhaps one who is already exploring naturism or an arts community that is body positive. Strangely, the yoga community can be very conservative around nudity, much less so than say a dance or arts community.

Sign Waivers: Have your students sign a waiver too of your choosing of words to protect yourself but something along the lines of that everyone is a consenting adult who for the purpose of this class agree to be naked and that they will be around other naked people and that they are in good health and sound mind and release you of any responsibility for injuries etc.

“Two issues that have plagued us in the struggle to advance a body-positive culture are the vagueness of the laws and the reliance on interpretation by the mythical “reasonable person” or “community standards.” It allows the citing officer and the judge to interpret the incident anyway they want. Avoiding trouble and winning in court are two separate issues.

1. Maintaining open and cordial communication with the owners of the facilities and the neighbors is crucial. People don’t sue or report their friends to the police.

2. Second, yoga is well established as a popular health discipline free from suspicion as a cover for illegal sexual activity (massage, for example, does not enjoy this freedom). Emphasize the “yoga” over the “naked.”

3. Third, yoga carries religious overtones which offers cover on the basis of freedom of religion. Anything exotic also lends itself to excuse from “community standards” precisely because it is not something commonly found in the local community. Officers are reluctant to cite activity that may be some exotic religious practice than something they’re more familiar with as fronts for prostitution.

4. Finally, nonsexual mixed nude recreation is well established. Naked yoga can be presented as a variation of nudism or naturism by alternatively referring to it as “nudist yoga” or ‘naturist yoga.’ “

This is a clever write-up from AANR American Association of Nude Recreation on the Nudist Bill of Rights. http://www.aanr.com/nudist-bill-of-rights You can add your signature in support.

My final advice would be to reach out to MARNA (Maryland Area Naturists) http://marnacamp.org to let them know about what your plans are they can also inform you of the legalities of your state and district and things to be aware of. They will know all about legalities and nudity on a state level as well as navigating any potential legal problems. They have been around a long time. So glad you’re spreading the love up there.

When I’m in D.C. I’ll totally stop in and take a class.